Curaçao is in the Southern Caribbean Sea, together with sister islands Aruba and Bonaire. Following a referendum, and as a result of constitutional change, Curaçao became a constituent country within the Kingdom of the Netherlands on October 10, 2010. Consequently, Curaçao now controls and manages its own internal affairs as an autonomous country with special areas being managed by the Kingdom, such as extradition, defense and foreign relations. Curaçao is the largest of the six islands in the Caribbean that together constitute the Caribbean part of the Kingdom of the Netherlands. 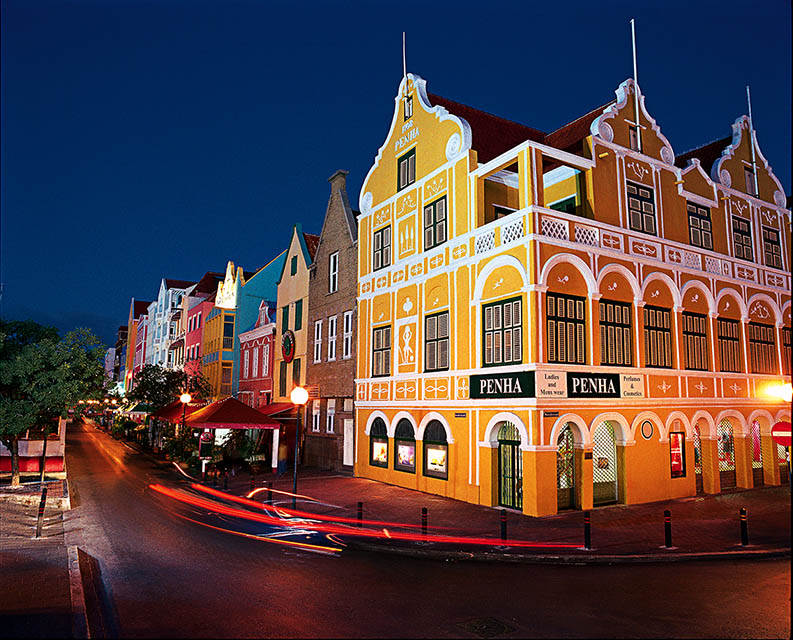 The island is situated in the Southern Caribbean Sea, about 70 km (44 miles) off the coast of Venezuela, with neighboring islands Aruba and Bonaire. The island’s total area is 444 square km (171 square miles). It is generally flat with a small hilly area in the western part.

Curaçao is characterized by warm tropical temperatures with the highest temperatures occurring in September. The skies are mostly clear to partly clouded and little rainfall makes for a relatively dry climate. While September through November are known for their increased rainfall, the island falls just outside of the hurricane belt and thereby avoids the regions heavier storms.

The average temperature in Curaçao is 28 degrees C (76F) and fluctuations during winter and summer rarely deviate more than a few degrees from the mean. Moreover, the island benefits from the Trade Winds which bring cooling during the day and warming during the night which allow for a pleasant constant climate throughout the day.

The multi-cultural composition of the island’s population is further manifested in the use of language. There are three official languages in Curaçao: Papiamentu, a local language that is a mix of Portuguese, Dutch, Spanish and English; Dutch; and English.

Spanish is also widely spoken on the island. Because of the large number of immigrants in Curaçao, different population segments also speak Portuguese, French and German, among others.

The island is a politically stable country in the Caribbean region. There is a parliamentary democracy in place with an independent legal system, based primarily on the Dutch civil law with the underlying premises of freedom of association, right to form political parties, freedom of the press and freedom of speech.

The Prime Minister acts as head of the government, and Curaçao is fully responsible for the conduct of its own domestic affairs. Defense and foreign affairs are the responsibility of the Kingdom of the Netherlands.

Judges appointed by the Dutch King serve the District Court and the Joint Court of Appeals, which serves all six Dutch Caribbean islands and hears civil cases as well as criminal cases. The Charter for the Kingdom of the Netherlands forms the basis for the possibility to appeal to the Supreme Court in the Netherlands.

The Charter is an assurance for good governance and the preservation of human rights. Numerous offices of renowned law firms have been established in Curaçao and assure a high level of legal services for advice, setting up your business and in court proceedings.

Learn more about the court.

Curacao’s economy is diversified and open. Among its most vital pillars of the local economy are trade and shipping, logistic and dry dock services, international financial services, oil refining, and tourism.

Due to Curaçao’s strategic geographical location with respect to the United States of America and South America and its unique position within the Kingdom of the Netherlands it is able to benefit from strong business ties within these regions.

Curaçao has preferential access to both the US and EU markets through the US Caribbean Basin Initiative and the European Union-Overseas Countries and Territories Agreement, respectively. Curaçao has also concluded a Tax Information Exchange Agreement with the US Government, and is an early adopter of the IRS Foreign Account Tax Compliance Act.

Curaçao and St. Maarten together have one Central Bank and one currency, the Netherlands Antillean guilder (ANG). This currency has been pegged to the US dollar since 1971 at an exchange rate of ANG 1.79 per 1 USD. The official selling rate for other currencies is set daily on the basis of their rate of exchange with the US dollar.

Public education is based on the Dutch educational system, with Dutch as the official language of instruction. The main institute of higher learning is the University of Curaçao, enrolling more than 2,000 students.

The island additionally offers higher education at its offshore medical school, language schools and academies for fine art, music, police, teacher and nurse-training. As a result Curaçao has a highly skilled labor force.

Insurance is provided by several private insurance firms as well as by the Social Insurance Bank (SVB). Since the introduction of the basic healthcare insurance (BVZ) in 2013, the island is able to provide all residents with a uniform insurance. Non-residents, with a labor-contract under civil law and a company subject to payroll taxes are also given access under the BVZ Act.