Circular Economy in Biomass & Food: Opportunities for Sweden and the Netherlands 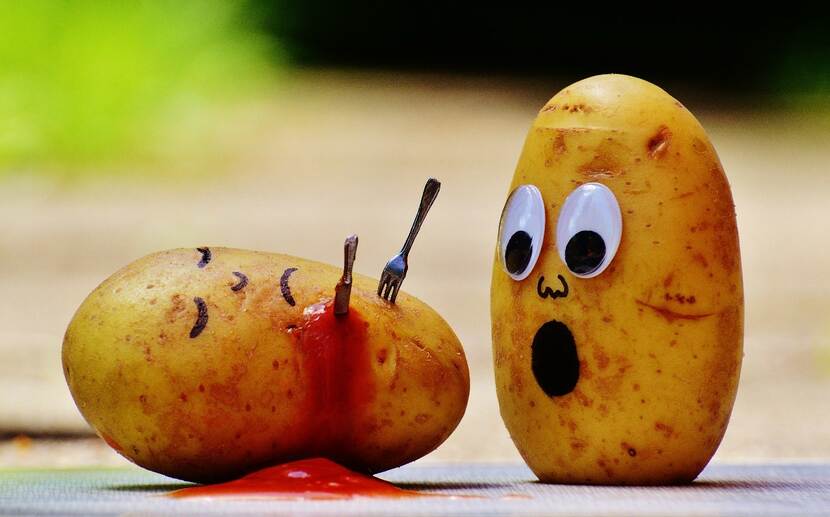 A Circular Biomass & Food Sector: What does that even mean?

The basics of Circular Economy (CE) might be relatively easy to grasp when the focus lies on the construction sector, as everyone can imagine using old materials from one building to build something new. However, it could be a bit more difficult to understand CE if you apply it to the biomass & food sector. First it might be good to explain that biomass consists of organic materials (such as wood chips, food waste streams or animal manure), which can be used as a sustainable energy source. But how does that work? For example, how does one reuse food? How can we retain value from resources that we literally consume?

Even though certain circular innovations within this industry indeed are quite complex, the basic principle is not. Composting, for instance, is a well-known and efficient process in which organic “waste” is being decomposed into a matter that could be used as a fertilizer. In this way, scarce nutrients (phosphorus, potassium, nitrogen etc.) are re-used to increase agricultural output. This technique is nothing new though. A Roman general, for example, already described this process and its benefits for agricultural land (Marcus Porcius Cato in “De Agri Cultura”, 234 – 149 BC). His technique even included what appears to be the first recorded use of composting using worms (vermicomposting), to decompose the matter further.

“How can we retain value from resources that we literally consume?”

Nowadays, there are countless initiatives to make the biomass & food sector more circular. The scope of initiatives is broad and could aim at, for example, using less raw materials (food waste reduction), re-using more secondary materials (biofuel from waste), or by disrupting the sector completely (synthetic meat grown in a lab). So, it is absolutely possible to apply CE to the biomass & food sector. But why would we put in all this effort to do so?

Why does the biomass & food sector need to become circular?

Well, why would any country’s biomass & food sector need to? As said before, we are borrowing resources from our earth. Every year, we use more resources than the earth is able to replenish. The exact day on which we exceed this annual amount, is called Earth Overshoot Day. As can be seen in the graph below, we can barely stabilize the trend of this day taking place earlier almost every year. Food demand makes up 26% of our global Ecological Footprint, and our Carbon Footprint even makes up 60%. This perfectly shows that our biomass & food sector is not sustainable in the long run. Therefore, applying the CE-principle to decarbonize, redesign, and rethink this sector is required. 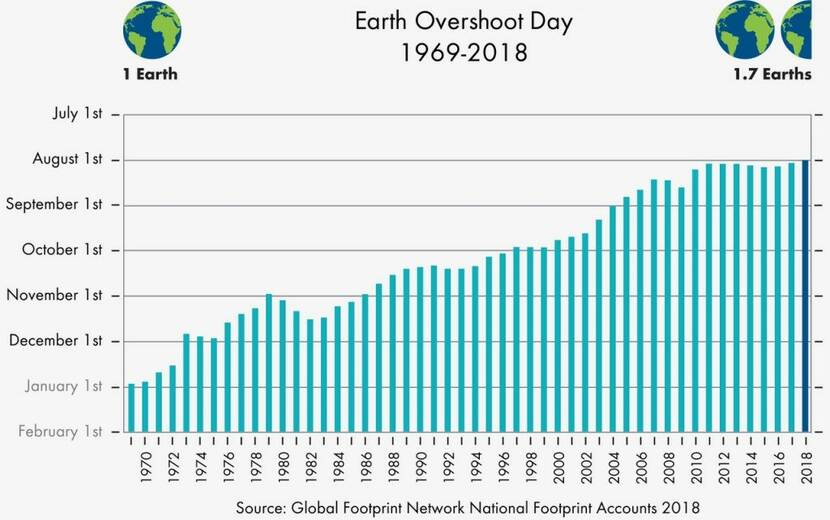 The necessity is not only backed by numbers. The symptoms of a defective biomass & food sector are more visible than ever. Nutrient depletion in soils (phosphorus, potassium, nitrogen etc.) deteriorates soil quality and reduces crop yield. Therefore, it threatens global food security and agricultural sustainability (source).

“The symptoms of a defective biomass & food sector are more visible than ever.”

The biomass & food industry also has a negative impact on our earth’s biodiversity, due to habitat loss by deforestation and the expansion of agricultural land. Sure, extinction is only natural, however, current species’ extinction levels are around 1,000 times the natural background rate. Moreover, it is worrisome that nearly 90% of the world’s marine fish stocks are now fully exploited, overexploited or depleted.

Why would the Swedish and Dutch biomass & food sectors want to become circular?

Both countries’ economies rely heavily on their biomass & food sector. In Sweden, the food industry is the 4th largest industry, with 50.000 employees. The country’s fishing sector is especially big, as they annually export for around 4 billion euros worth of fish & seafood. Moreover, Sweden is a global leader in bioenergy, which is its leading energy source. The main reason for the rapid growth of the bioenergy sector in the last decades in Sweden is broad political support. Sweden managed to bring back the percentage of oil as an energy source from 75 percent in 1970 to around 20 per cent today, partially due to its bioenergy revolution.

“Sweden is a global leader in bioenergy, which is its leading energy source.”

As for the Netherlands, the agriculture and food industry is its largest industry, with over 140.000 employees. The export of agricultural goods was estimated at 91.7 billion euros in 2017, which is 19.4 percent of the country’s total exports. The sector’s added value is about 48 billion euros per year. The industry’s ecosystem in the Netherlands houses around 5,300  companies, including global leaders with major production or R&D sites. Also, due to the presence of world-class research institutes, universities and numerous public-private partnerships, the Netherlands has the 2nd highest private R&D investment in agrifood in Europe.

Most countries experience the same necessity to reinvent this sector, which presents a huge economic opportunity. Both Sweden and the Netherlands are in the lead to become global leaders in redesigning this sector. As these two countries are focusing on different areas, collaborating could benefit both, whilst merely competing would not benefit either. So, what are Sweden and the Netherlands already doing to make this sector circular? And where are the opportunities for bilateral collaboration exactly?

“Collaborating could benefit both, whilst merely competing would not benefit either.”

Circularity in the Swedish and Dutch biomass & food sectors: A comparison

Sweden
As mentioned before, Sweden is a world leader in bioenergy. Agricultural waste streams, including for example waste from food production or animal manure, are used to produce bioenergy very efficiently. These waste-to-energy plants play an important role for Sweden in achieving their goal to become fossil-free by 2040. It is especially impressive to see how the organic waste streams’ infrastructure has been set up. There is as a big commitment from waste management companies, municipalities, and local farmers to collaborate throughout the process, even though these are often arranged only regional. Larger collaborations are often hard to organize, partially caused by the country’s geographic spread and the lack of a clear national coordination. The next step would be to involve the entire value chain on a national level. A positive influential factor is, Svebio, an organization that promotes the further development of bioenergy.

A great example of local collaboration is the city of Malmö, which has transformed itself from a decaying city into an eco-friendly hub. One of the initiatives focused on the Västra Hamnen (western harbor) district, where they launched a system that uses vacuum suction to transport household waste into a central tank underground, which is then converted into biogas to fuel Malmö’s public transportation.

When focusing on CE in throughout the entire food chain instead of merely on bioenergy, Sweden still has a lot to do. Even though the government has set out a Swedish Food Strategy for the following years, with CE being part of it, there is not enough action. For CE to be applied in this sector, Sweden needs cooperation throughout the whole food chain. Several organizations are trying to achieve this. For example, the research institutes IVL and RISE are both part of the EU project REFRESH, which is taking action against food waste.

The Netherlands
The Dutch agriculture and food industry clearly seems strong and well developed. The sector is beneficially positioned to create a switch towards CE, throughout its innovation ecosystem, which can be seen in the image below (source). 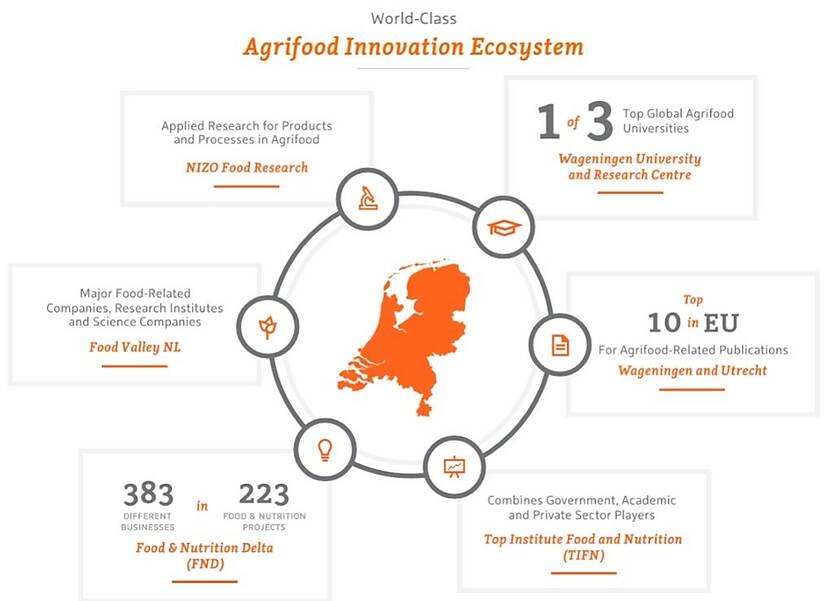 The ecosystem’s favorable position for the CE-transition, is mainly driven by three forces:

The three driving forces reinforce each other, due to the many public-private initiatives in the Netherlands. A good example of this is the Taskforce Circular Economy in Food, which is a collaboration aimed at preventing and reducing food waste, and at becoming a global leader in monetizing organic waste streams. The taskforce is led by Wageningen University, and includes partners from SMEs, multinationals, NGOs, and the government.

What are some of the opportunities for more bilateral collaboration in this sector? 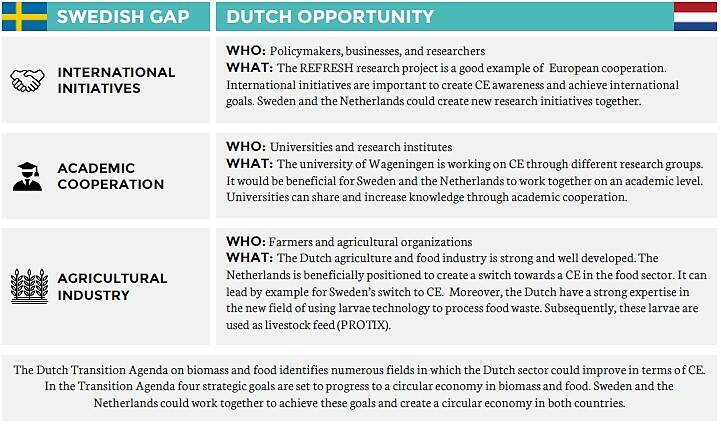 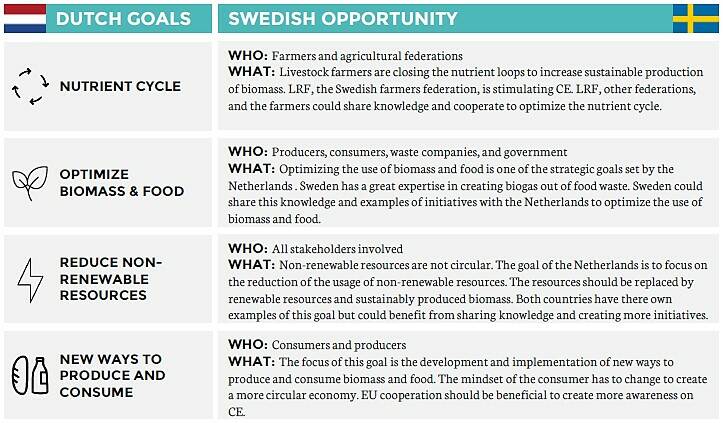 Source: Created by an external party who benchmarked CE-developments in three Dutch and Swedish sectors.

Creating a paradigm shift in the Swedish and Dutch biomass & food sectors is necessary, as it is in most countries. This difficult task requires a financial and strategic commitment from both countries’ entire agrifood ecosystems (government, knowledge institutes, NGOs, and businesses), which will benefit both countries in the long run. After all, you can’t make an omelet without breaking the eggs.

Both countries are global leaders in transitioning their biomass & food sectors towards circularity. However, they do so in different areas, which presents mutually beneficial opportunities for further collaboration. In this way, both countries will be way ahead of the pack and could then benefit from their lead, causing a threatened industry to become a certainty for sustainable economic growth.

This article is written by Rutger Oorsprong and was originally published 29 August 2018 on LinkedIn.