On the 4th of June, the Embassy of the Netherlands in Stockholm and the Dutch Chamber of Commerce organised a seminar to talk about the obstacles and opportunities for migrants in Sweden who want to become an entrepreneur.

The direct reason behind the event was a recent research project by Karen Haandrikman and Natasha Webster (Stockholm University), who have examined the obstacles that women migrants experience when setting up a business in Sweden. To identify possible policy instruments and other solutions to overcome these challenges, the researchers were joined by two discussion panels – one consisting of policy experts, the other of female entrepreneurs who themselves had a migrant background.

Ambassador Ines Coppoolse took the stage to welcome all participants. She emphasised how important innovation, sustainability and entrepreneurship always had been to the flourishing of a country like the Netherlands. As it happened, the seminar coincided with the Global Entrepreneurship Summit 2019 in The Hague. That conference demonstrates how innovative entrepreneurship often is a cross-border question. Still, initiating a business outside one's home country remains difficult for many – and especially for women. The relevance of the topic is evident, in other words.

Moderator Ruben Brunsveld then introduced himself, pointing out his own intercultural background, and clarified the set-up of the evening. Without much further ado he welcomed the two “real specialists”, Haandrikman and Webster, to the floor to elaborate on their project “Opportunities and obstacles for migrant women entrepreneurs in Sweden”.

Understanding the challenges to entrepreneurship

Entrepreneurship is not only an economic fact, Haandrikman explained, but also a social practice that tells much about integration. Race, ethnicity and gender are important factors, as entrepreneurship and innovation remain associated with “white male”-dominated industries. Although women make up 30% of entrepreneurs in the EU, they only obtain 1% of all risk capital. Against the background of increased immigration to Sweden and a persistent high employment gap, Haandrikman and Webster wanted to better understand the challenges that migrant women entrepreneurs are facing – as well as to translate these insights into more practical (policy) avenues.

The research project had a quantitative and a qualitative part. Haandrikman’s analysis of register data showed that self-employment among migrant groups is above average, although there are regional differences. The forty women whom Webster interviewed had much in common despite their diversity. They tended to run small businesses, often multiple ones at the same time. Most of them had already been entrepreneurs prior to migration.

The interviewees had told Webster that getting to know Sweden was a long-term process – not least to master the language – in which networks, friends and partners played an important role. The entrepreneurs regularly experienced double discrimination, such as an uneven access to services. The processes for initiating and running a business were moreover found to be unclear. In other words, time and support were needed in order to unlock the potential of (female) migrant entrepreneurs and break existing expectations.

The first expert panel consisted of female migrant entrepreneurs who told their personal story. Virginie Garcia moved from France to Sweden nine years ago for family reasons. Since she could not speak Swedish and did not know anyone, she struggled to find her place. However, after working for French tourism for some years, having built up a network, she decided it was time to begin her own business – in photography.

Wendy Heijne began to work in Sweden after completing her studies in the Netherlands. At H&M, she slowly integrated into Swedish society and its working culture. After eight years she wanted to set up her own fashion brand. Heijne told that her experience at H&M had not in fact been too helpful, as she had learnt to not to be direct or assertive – qualities that are usually quite positive for independent entrepreneurs. Garcia agreed that there is a need to be lagom; don’t be too pushy, as she herself had experienced.

Heijne felt it was easier to start a business later in life, since she was already settled. Her husband could provide income in any case, while their children were already somewhat older. Garcia had more trouble learning the language at the age of forty. It was also difficult for her to enter the market, since photography is such a male-dominated world. As a foreign-born woman, you would always have to prove yourself double. But what could be done to change this perception? Education is essential, according to Garcia, both in school and at home. Parents need to emphasise that girls and boys have equal capacity to pursue the career they want to.

In the second panel, four policy experts discussed what government and business could do to stimulate migrant entrepreneurship. Sam Yildirim, development manager at the Stockholm County administration, explained how local authorities can provide entrepreneurial possibilities to migrants. He mentioned improved language training, specifically oriented at professional work, and networking opportunities.

Elisabeth Suzuki, CEO of Know a Talent, also emphasised the importance of networks. Her company offers a platform that encourages participants to involve each other by referring friends to new job opportunities. In this way, people do not only look at a cv, but try to see someone’s potential. In this sense, Suzuki said, it can be an asset to have another cultural background that can give you a different perspective on things.

Petya Thorne, communications and community manager at Impact Invest, described how her company provides workshops and coaching for (potential) female entrepreneurs. Their projects are party funded by the Swedish government. These programmes often end with a pitch to one of their investors, but businesses can also grow organically.

One point for discussion was the importance of speaking the Swedish language. Yildirim stressed that language is crucial, although one also has to understand “how things work” – that is, the process of administration, rules and regulations, et cetera. Thorne, however, found the demand to speak near-perfect Swedish to be very odd since so many people speak decent English. Yet not everyone feels comfortable doing business in English, Yildirim responded, especially outside urban areas. Of course that’s true, Thorne replied, but the expectations are often much higher than what is necessary for practical purposes.

To end with, Brunsveld asked Edgar Haverkamp – consular affairs and migration officer at the Dutch Embassy – what the Netherlands could learn from Sweden. Haverkamp replied that it would be wise to pay more attention to education for migrants. In the Netherlands, municipalities often have insufficient resources to provide proper education. The fact that Sweden manages it better, with more (financial) resources and more coordination from above, should be a useful inspiration for policy in other countries. 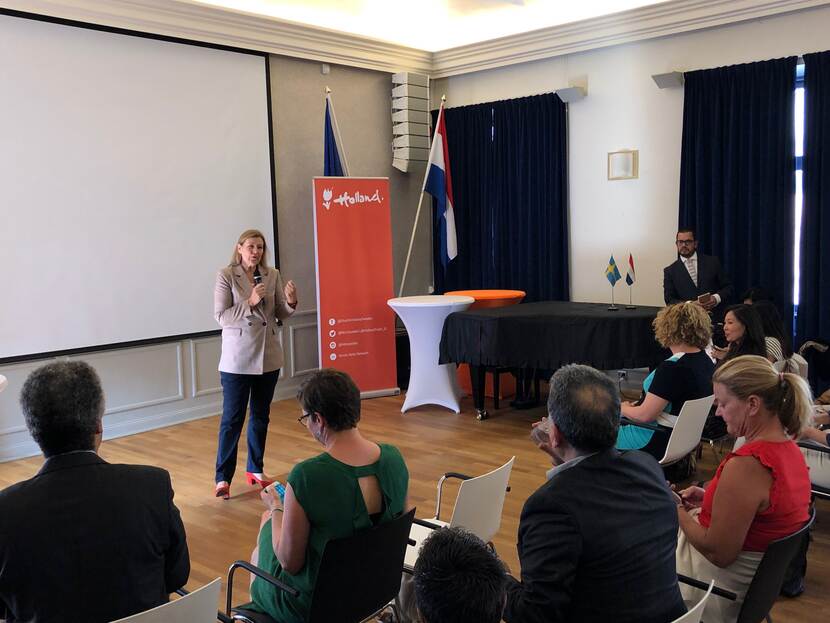 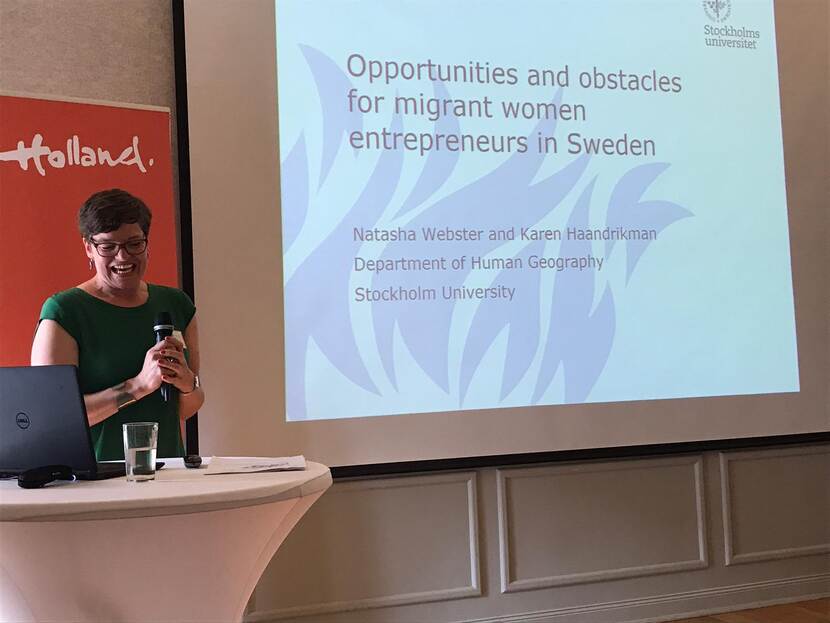 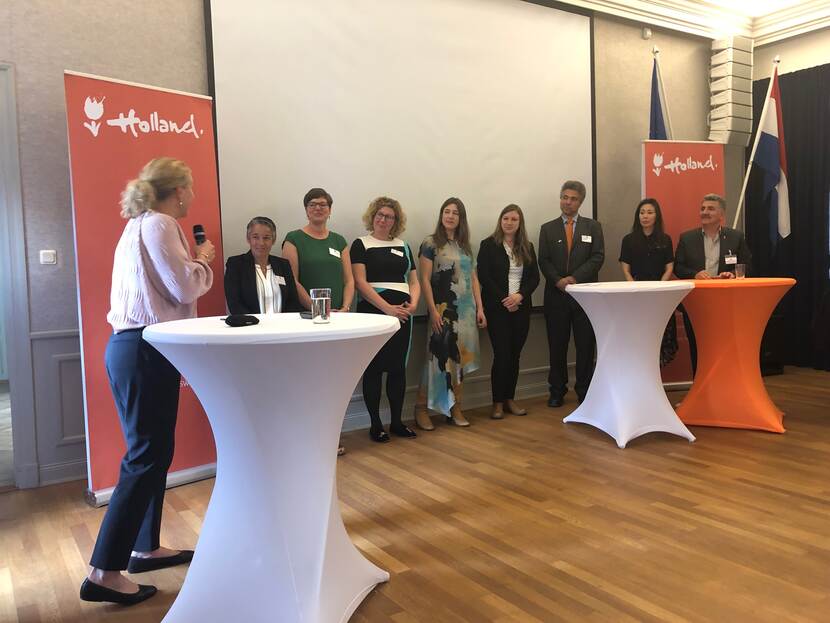 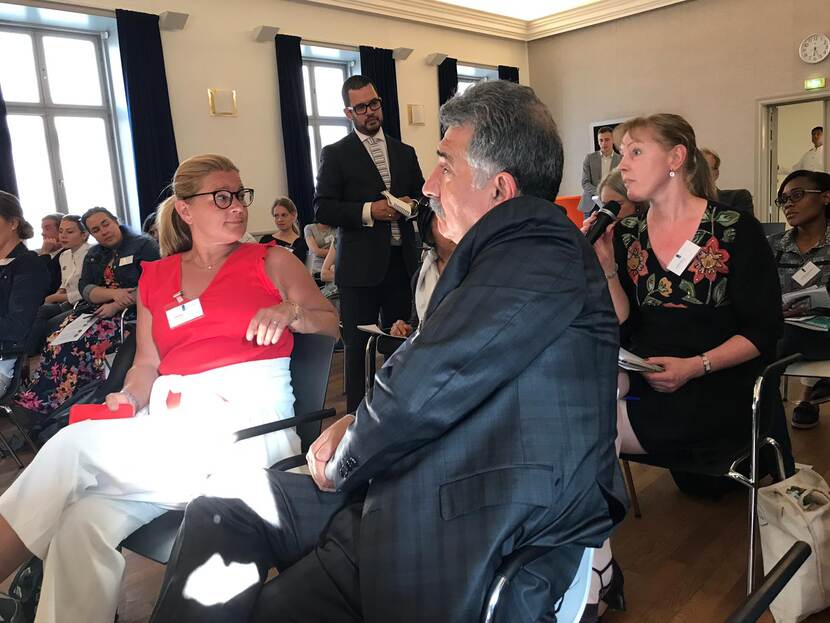