Despite the large distance between the Netherlands and Timor-Leste that literally in the edge of Eurasian continent and archipelagos – the two countries share a friendly bilateral relationship that has been growing from year to year, politically and economically. Last month, the Political Department from the Embassy of the Kingdom of the Netherlands in Jakarta visited the capital of Timor-Leste, Dili. The Embassy in Jakarta is accredited to Timor-Leste. 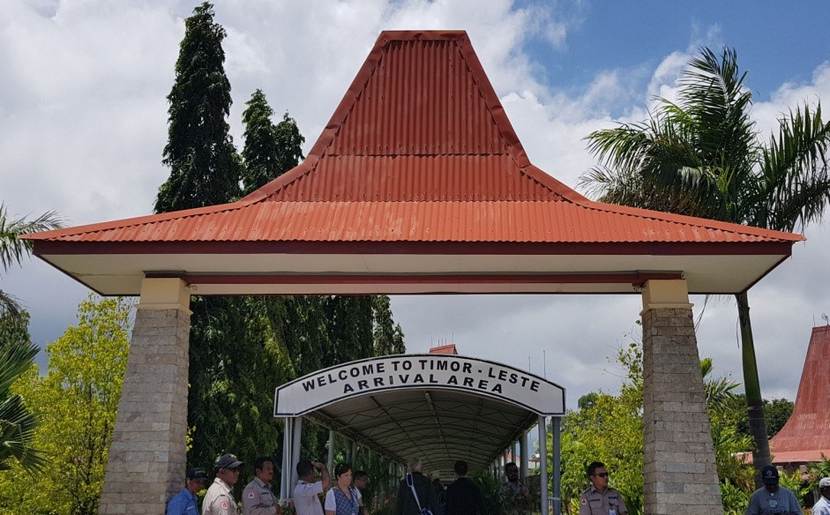 Between 11 and 14 March 2018  the Head of Political Department, Prof Dr Roel van der Veen and Senior Policy Advisor, Felix Sharief met wide a wide range of stakeholders in Dili, including government officials, parliamentarians, civil society, foreign representations, international organisations, media representatives and the Dutch community in Dili. The aim of this visit was to enhance the political relation with Timor-Leste and to get more insights in the upcoming elections in May 2018. Additionally it aimed to explore the opportunity of working together with the civil society, and the possibility of investment opportunities for the Dutch companies. The team also heard the feedback and comments on matters related to consular affairs with the Dutch community, and attended the kick-off a joint project with UNESCO and Timor-Leste Press Council.

In the beginning of the visit, the team had the opportunity to call on the Executive Director of Belun, Mr Luis Ximenes, together with his colleagues. Ximenes leads a local civil society organisation (CSO) that focuses on conflict prevention, community capacity development, and research development. Despite the small team that Belun has, the organisation has developed a programme called The Early Warning, Early Response (EWER) system to monitor and gather data about violent incidents and the changing situation in nine districts of Timor-Leste. The data portal is very useful for the government agencies and state apparatus, as well as for community leaders, CSOs and others. After that, the meeting was continued for a Dutch community gathering.

On the second day, the team begun the day with a meeting with the Executive Director of Fundasaun Mahein (FM), Nelson Belo. FM is a local CSO that assists in increasing the legitimacy and capacity of the Timorese security sector through citizen participation in the development of relevant legislation, policies and budgets. Last year the Netherlands supported FM for a project on security monitoring around April 2017 elections. The team also took the opportunity to discuss the political and economic climates of the country and its security around the elections in May 2018.

After the meeting with CSO’s, the team had the opportunity to call on the Head of Political Department at the European Union (EU) Delegation to Timor-Leste, Mr Alexandre Zafiriou. The team and Mr Zafiriou discussed a broad range of topics, including the political and economic development of the country, particularly the success stories and its challenges. Ahead of the elections, we also discussed how the development cooperation provided by the EU could benefit the country’s development. 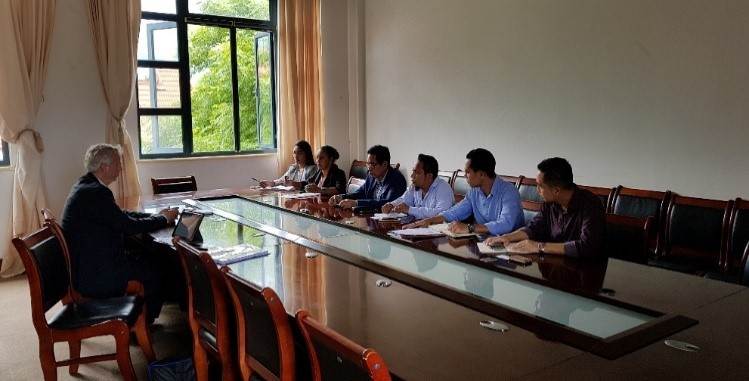 Business as usual is not an option for the Netherlands to Timor-Leste. The Embassy met with the Executive Director of TradeInvest Timor-Leste, Mr Arcanjo da Silva. This investment and trade promotion agency acknowledged the added-value and competitive advantages of the Dutch expertise in six priorities area of investment in the country, namely petroleum and mineral; agriculture and fisheries; tourism; industry and manufacture; and infrastructure. There is an increased interest of Dutch companies in doing trade and investment in Timor-Leste. In fact, Heineken was the first foreign investor in the country, with total investment of USD 40 million on the construction of a beverage company in Hera. Heineken’s investment has a direct positive impact to the country’s economic development, as the investment will create 200 direct jobs and 800 indirect jobs. Strategically speaking, experiences with Heineken’s entry can pave the way for more foreign investment coming to Timor-Leste. 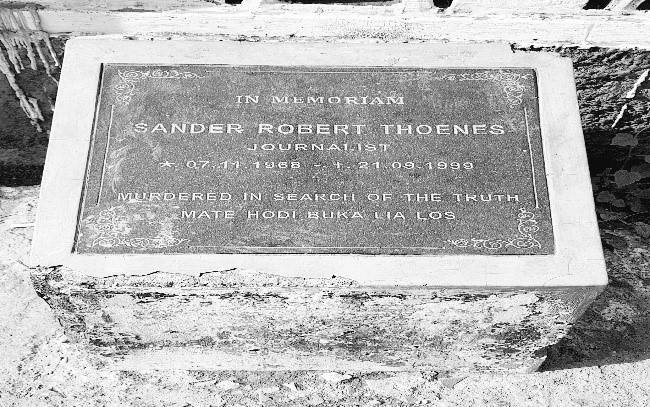 On the third day, the day begun with honouring the bravery of a Dutch journalist, Sander Thoenes. Sanders was killed on a reporting duty in 1999. The team together with a Dutch citizen visited the monument in Dili, on the street where Toenes was shot. There are still memorial services being held every year by locals. To honour his dedication in journalism, the Sander Thoenes Award is presented yearly in December by Timor-Leste’s Journalist Association, to a promising young journalist. The awards consists of a trophy, a laptop and cash.

On the late of the day, the team attended the kick off ceremony on strengthening media self-regulatory mechanism in Timor-Leste. This three-year project is a collaboration between UNESCO and Timor-Leste Press Council, with financial support from the Government of the Kingdom of the Netherlands. It also includes direct collaboration with the local universities with journalism and communication programmes namely, Universidade Nacional Timor-Lorosa’e and Universidade Oriental Timor-Lorosa’e, as well sharing the experience and best practise from Indonesian Press Council.

Prof Dr van der Veen delivered the speech where he linked the importance of freedom of expression to the importance of an independent, free and pluralistic media in a democratic society. In emphasising this priority, Prof Dr van der Veen said, “Human rights are at the heart of Dutch foreign policy. Freedom of expression is a priority for us, because it affects so many other rights – not least because it affects people’s ability to publicise the violation of other rights. This is why I think is vital to reflect on this area, in which we must work to safeguard freedom”. 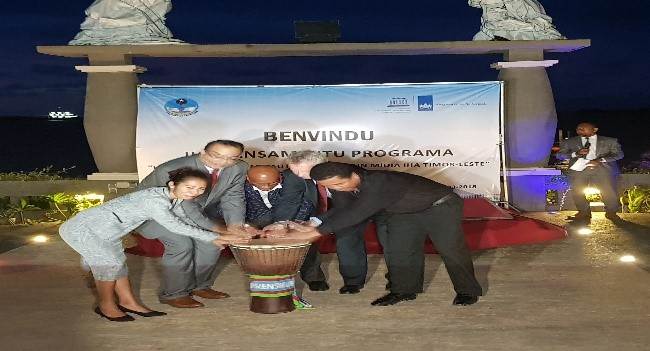 The ceremony culminated with the hitting of a traditional drum by all parties involved symbolizing the official launch of the project. This was followed up by the signing of a Letter of Intent between UNESCO, the press council and the two universities to concretize the collaboration between the four parties to train journalism students. 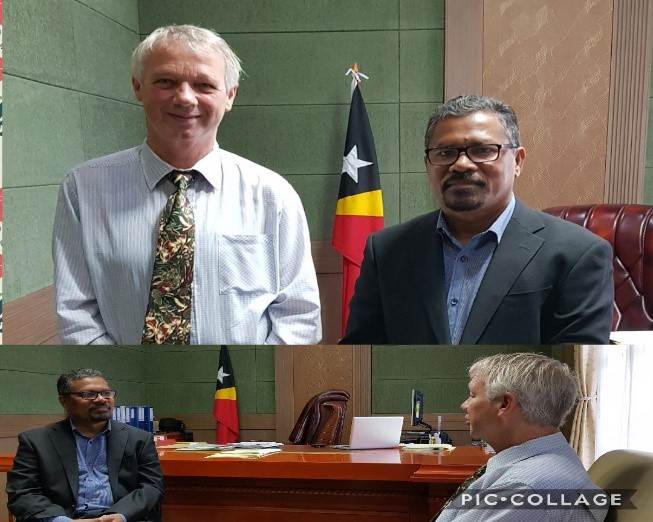 On the last day, the team concluded the visit with an opportunity to come and call on the Minister in the Presidency of the Council of Ministers, HE Adriano do Nascimento. They discussed a broad range of issue related to bilateral relations between the Netherlands and Timor-Leste, and how to move forward.

For more information regarding to this visit, please contact JAK-PA@minbuza.nl. Thank you for your attention.