Factsheet on the judiciary in the Netherlands

The Netherlands, as a democracy based on the rule of law, applies a system of checks and balances between the legislative, executive and judicial branches. In the factsheet below you will find information about the judicial system in the Netherlands, the role of parliament and how a separation of powers is arranged. The factsheet also explains how judges are appointed, as well as members of the Council for the Judiciary. Finally, the system of judicial review for conformity with the Constitution and international law is explained as well as the role of the Council for the Judiciary within the judicial system.

General information about the judicial system in the Netherlands

In the Dutch judicial system, a distinction is made between civil, administrative and criminal law. Several special chambers and divisions exist, such as the Agricultural Tenancies Chamber, the Enterprise Division and the Military Chamber, but these will not be discussed here.

Cases are generally first heard by a district court. In civil, criminal and tax cases, the parties can lodge an appeal against the district court’s judgment with the court of appeal. The next step is an appeal in cassation at the Supreme Court, the Netherlands’ highest court in civil, criminal and tax cases. In cassation proceedings the Supreme Court looks not at the facts but at whether the law has been applied properly.

Criminal cases are brought before the court by the Public Prosecution Service and are heard by the competent district court in the area where the offence was committed.

Administrative cases must always be preceded by the objection procedure, which is started by lodging a notice of objection with the administrative authority in question. If the objection is declared unfounded, an application for judicial review may be lodged with the Administrative Court for Trade and Industry (company law) or with a district court. An appeal may be lodged against district court judgments with the Council of State (cases on asylum and immigration law, or environmental and planning law) or with the Central Appeals Court for Public Service and Social Security Matters (social security cases).

Under the Constitution everyone has the right to legal representation in court proceedings. In some cases the law actually requires parties to be represented by a lawyer. Anyone who does not have the means to pay for a lawyer can apply for assistance under the Legal Aid Act.

How is the separation of powers assured in the Netherlands?

The Netherlands is a democratic state based on the rule of law in which there is separation of powers between the three branches of government. A system of checks and balances maintains an equilibrium between the legislative, executive and judicial branches.

The government is the executive branch. It is made up of the monarch and the ministers. The Cabinet considers and decides on overall government policy and promotes the coherence of that policy. The monarch is ‘inviolable’, which means that the prime minister is accountable for what the monarch says and does. Ministers are accountable to Parliament for all the monarch’s actions. The government pursues policy, introduces bills and represents the Netherlands abroad. The full spectrum of its actions, or lack thereof, is scrutinised by Parliament.

The judicial branch administers the justice system, which is organised as described above. It is independent of the other two branches. Courts give their judgments on the basis of international treaties and legislation. Judges are appointed for life, by Royal Decree. A judge’s appointment may only be terminated at the judge’s own request or when the judge reaches retirement age (70), and in special cases by the Supreme Court. The selection and appointment procedure for judges is discussed below.

The Council for the Judiciary forms an important link in the contact between the three branches. It provides advice to the government and the States General on legislation and policy concerning the judiciary, both on request and on its own initiative. The Council’s advice is very important to the legislative branch (Parliament) and the executive branch (the government) in the legislative process.

How are judges appointed at different levels? How are the members of the Council for the Judiciary appointed? 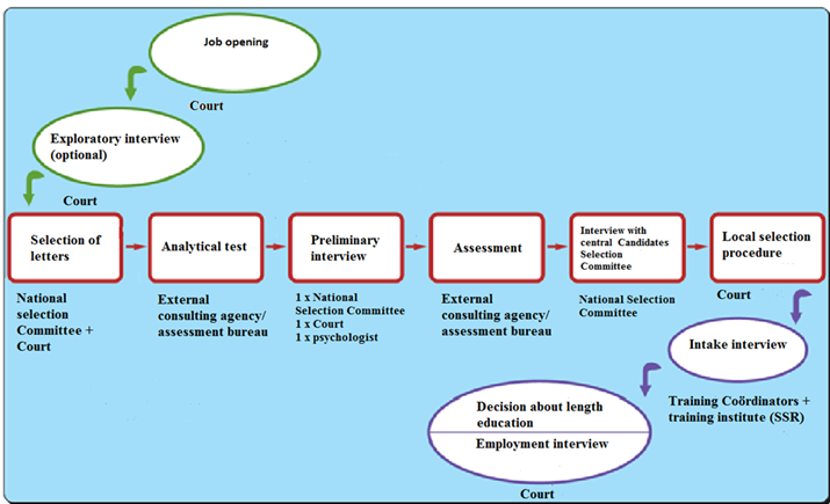 The Minister of Security and Justice assesses whether the recommendation meets the statutory requirements and other formal requirements. If this is the case, a nomination for appointment is submitted to the monarch. The monarch signs the Royal Decree, appointing the judge. Judges are appointed for life. Nominations for appointment are never rejected.

Vacancies on the Council for the Judiciary are published in the national media, after which an advisory committee assesses the candidates’ suitability and makes a recommendation to the Minister of Security and Justice. The advisory committee consists of a president of a court, a representative of the Netherlands Association for the Judiciary, a member of a court management board who is not a judge, and one person appointed by the Minister of Security and Justice. The member who is a court president chairs the committee.

What influence do Parliament and the government have after the appointment of a judge (term of appointment, dismissal disciplinary measures and training)?

Judges are appointed for life. Neither the government nor Parliament has any influence whatsoever on dismissal, promotion, disciplinary measures or training with regard to judges.

Does the Netherlands have a system of judicial review for conformity with the Constitution and international law?

It should be noted that the Council for the Judiciary is always able to provide advice on a bill. This allows the judiciary to express its opinion to Parliament on the constitutionality of a bill in advance. The actual examination and review of bills is the prerogative of Parliament.

What is the role of the Dutch Council for the Judiciary within the judicial system?

The Council is responsible for:

The Council’s tasks also include advising Parliament on new legislation, after consulting the courts.

The budget for the administration of justice is set according to objective criteria laid down in legislation. The Minister of Security and Justice provides the necessary funds from the central government budget, which is set by the government and Parliament.